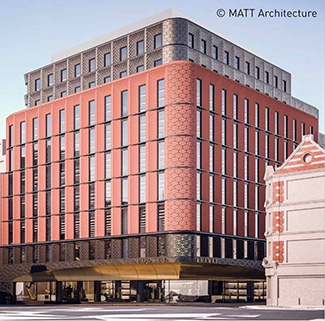 In the bustling quarter Soho in the London city centre, near Leicester Square, a special building complex is planned. With the Ilona Rose House, the client Soho Estates wants to create a stylish and modern centre for tenants, visitors and residents.

The building will house tailor-made studios and facilities for film producer Warner Brothers as well as restaurants, cafes and shops.

To stand out from the surrounding buildings, MATT Architecture designed the building envelope with rose motifs.

GIG is awarded the design and execution of 10 facade types, whereas the largest area is covered by a unitized facade at levels 1 to 8 along Charing Cross Road and Manette Street. On the first floor, the rose motifs are embossed on brass sheets, on the floors 7 and 8 on coated steel sheets.
At the floors 2 to 6, identical motifs are formed in GRC panels.
On the ground floor 1.4m large single roses made of brass sheets should be placed together.

Another highlight is located next to the entrance facade: a conical steel construction, which spans from the 3rd basement floor to the 2nd upper floor.